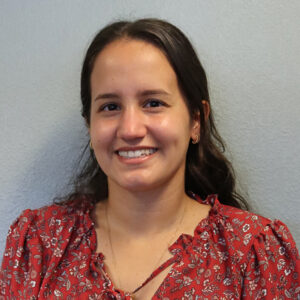 Please welcome Andreina, one of the newest externs to join the family at Lone Mountain Animal Hospital!

Andreina is a fourth-year veterinary medical student from North Carolina State University (NC State) and will graduate in 2022. Andreina is originally from Venezuela, but she and her family relocated to the United States when she was young. She lived in Florida with her parents before moving to Raleigh, North Carolina.

Growing up, Andreina said she had always been interested in medicine but hadn’t considered going into animal medicine since she didn’t have any pets and didn’t realize what a veterinarian was when she was a child. Once she began volunteering at a horse farm in Raleigh, Andreina said she started to realize she enjoyed working with animals and wanted to pursue that further.

Andreina received her Bachelor’s in Zoology from NC State and took a gap year after graduating to work and gain more experience before applying to vet school. She also wanted a little bit of break before going back to school. Andreina worked at a veterinary hospital in Raleigh, where she worked in kennel before moving up to a veterinary assistant position.

Andreina also volunteered in South Africa, where she worked on various farms doing wellness visits and vaccines for livestock and small animals, and capturing wild animals to vaccinate and remove any parasites from the animals. Her group also went to zoos in South Africa to work on the animals there.

“Just being in a clinical setting, I think that helps to really relate to what you’re going to see in the real world, outside of the classroom,” Andreina said.

In her spare time, Andreina enjoys doing Brazilian Jiu-Jitsu as a way to stay fit and to learn self-defense. She also enjoys hanging out with friends and describes herself as a foodie. She has a 2-year-old Pitbull named Luna that she adopted last year.

Welcome to the team, Andreina!