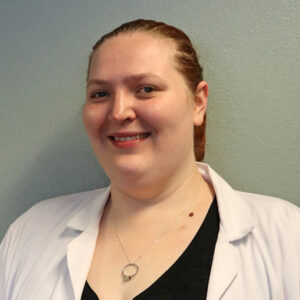 Larissa is currently attending the University of Glasgow in Scotland for her Doctorate of Veterinary Medicine and will graduate in 2023. She’s originally from West St. Paul, Minnesota but her family moved to Pheonix, Arizona when she was about 15-years-old. Growing up, Larissa mostly had dogs and her parents owned two cats when she was born. Larissa had talked about becoming a veterinarian since she was a little girl.

She originally attended Mesa State College, now known as Colorado Mesa University, in Grand Junction, Colorado to study human nursing. Larissa ended up changing her mind about human medicine and decided to pursue her passion for animal medicine instead. She attended Northern Arizona University where she graduated with a Bachelor’s in Biomedical Science with a minor in Chemistry.

“I had a fairly decent shot of getting in-state tuition, and if I did, my tuition would have been about $5,000 less expensive for the four years there than it is for the five years at Glasgow,” Larissa said. She mentioned that an added benefit about attending vet school in the United Kingdom is that she could practice animal medicine anywhere in the world if she wanted.

“Other than North America, 99% of the other countries are accredited by the Royal College of Veterinary Surgeons,” Larissa said.

Before attending the University of Glasgow, Larissa volunteered with local Humane Societies in Minnesota and Arizona since she was 11-years-old. She also worked at an animal clinic in Flagstaff, Arizona, and was part of Omega Phi Alpha, a service sorority, that worked with animals frequently.

She heard about the externship program at Lone Mountain while searching for an externship in the States. Larissa said she had been wanting to come back to the U.S. to see her family and was looking for something close to Pheonix. She found the externship program at Lone Mountain and chose to apply after reading past reviews from previous students. Larissa said she’s most looking forward to anything that’s hands-on and getting practical experience outside the classroom.

Larissa is most interested in small animal medicine and working with exotics. She said her passion lies in emergency medicine, which was also her passion when studying nursing. Larissa also enjoys surgery, dentistry, and animal weight management. She said she enjoys researching and learning about different cases and more about animal medicine in general.

In her spare time, Larissa enjoys hiking, painting, and traveling. While attending school in the U.K., Larissa has been to Spain and France. She has two dogs and two cats; a Golden Retriever named Simba, a Corgi named Bjorn, and two Norwegian Forest cats named Freya and Cinderella.

Welcome to the team, Larissa!